Last Friday, we were out and about, and I took some pictures that the Florida Chamber of Commerce would like to delete. I know that many of you have snow up to the kazoo, but in Florida, we're supposed to have balmy breezes and warm temperatures. Instead, we've been having record-setting cold temperatures. The "s" words (snow, sleet) have even been used by the television weatherperson as a slight possibilities! Truthfully, we did not get either one.

Look at this pathetic palm. It wants some sunshine and warm temperatures. 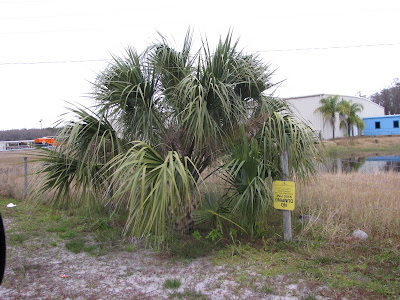 These Queen Palms are safe because of the building's protection. They are messy trees and could sure could use a pruning! But not until after warmer weather comes. 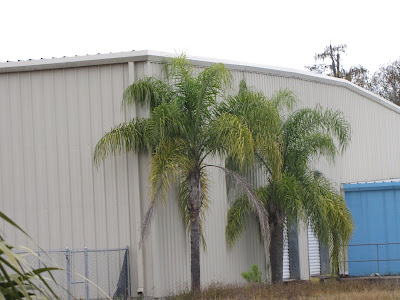 This shot could have been taken anywhere in the country, but it was taken about twenty minutes outside of Tampa. Look at those yucky skies! (It did rain an hour later.) Notice that the leaves have fallen from some of the trees. 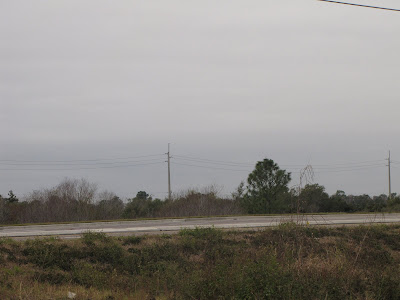 We went to a shopping mall. Look at these pathetic little trees--no leaves! They're naked! There's not much here that says, "Florida." 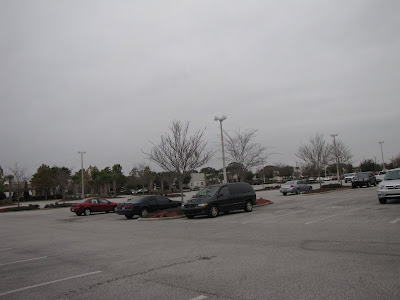 Folks who want their tropical plants to remain healthy, cover them up at night. However, many forget to uncover them during the day which causes the poor plants to "bake" under the covers. 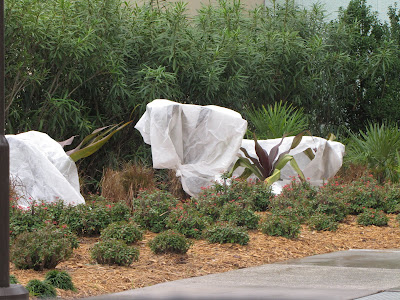 This picture was taken yesterday around noon at a nearby mall. Some trees are without leaves, while the good ol' palm smiles at the blue sky! 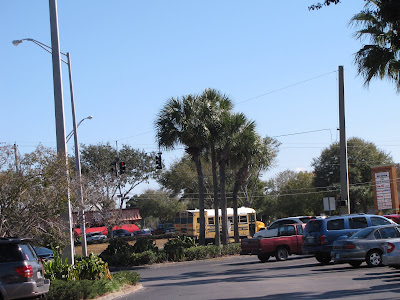 If you look closely, you'll see the frost on our rooftops. This picture was taken yesterday morning. At 8:00 AM, our temperature was 29º. 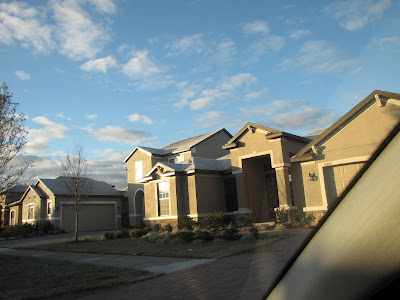 Susan at A Southern Daydreamer is the gracious hostess for Outdoor Wednesday. Participants post pictures of anything that they might find outdoors. 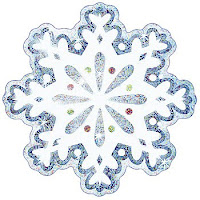 Oh my...from your photos it looks like you could be living next door to me. You truly are experiencing winter!! Brrrr!!

Wow your right..that doesn't look like the tropical Florida I grew up in..it looks like the Oklahoma I live in now!!! Global warming??LOL. Miss Bloomers

Good morning Sally. Yeah, where are you Mr. Gore. Global warming, NOT...

Florida fruit growers and farmers are going to take a hit with this bad weather too. How sad.

Mine is sunshine on my shoulder...a pelican's shoulder that is. come see, mine too is beautiful. At least I think.

SUNSHINE ON MY SHOULDER

It is very odd that Florida and Texas have been as cold, sometimes colder, than my part of Michigan.

Our temperatures are going to be slightly above normal (low to mid 30s) for the next 4-5 days. I hope yours return to normal soon too.

This weather is just crazy!

Isn't that the truth, Sally. I've heard it is freezing in Florida. Those poor trees ~ Thanks for the pictures.

It's been cold here too...all our trees are sad looking.

It seems like it is cold everywhere. But at least up north here we are a little more use to cold weather and snow. I feel sorry for your poor trees, plants oranges etc.

I feel so bad for all of you in the South. It is hard to deal with something so unexpected and it must be frightening to think that this might happen every winter (is that possible?).

Taking pictures of my making the cloche is a wonderful idea for a post. Thanks, Sally, for giving me some blogging inspiration! :-)

Global warming?LOL You take good pictures. Hopefully your weather will be back to normal soon.

I see you said these pics were taken last Friday. Last Friday I thought my plants still had a chance, but the freezing temps we've gone through since have devastated my tropical garden. I just went out to take some pictures thinking I would post them tomorrow, but decided its just too depressing. I cut a bunch of big limbs off my 18-year-old plumeria tree and brought them inside, I doubt the tree made it through and just about everything else is brown, the leaves are dead and falling, so incredibly sad. I know some will come back, but others won't.

On a bright note, warmer temps will be back this weekend and I can head to the beach. Like you, I also burn very easily and really have to be careful, but the beach is calling me and I'll answer soon! lol

We have sun today. I think it will be in the 50's next week, Kathy

It is hard to believe you are getting that kind of weather there. The weather everywhere this year has been out of control. You have something to look forward to as you know it will be beautiful there soon and warm.

It is so hard to believe that y'all are getting those cold temps. I hope you warm up soon. I actually think global "warming" REALLY means global "freezing" because we have had MUCH, MUCH colder than normal temperatures this year. I hope the plants and trees all survive.

Off topic.. In the place where I grew up, they call me "Sally" too hehehe.

I heard it was cold down there!

Hi Sally
The first few pictures with the gray skies look just like England. I can't believe how cold it's been there recently. I think the world weather has gone mad. We've had the worst snowfall recently for 25 years. Hope you are managing to keep warm and that all your tropical plants manage to survive.
Lindsay
x

Hi Sally,
I may have told you before that I once lived in St. Petersburg and the year we came back north, there was a very hard freeze and we heard that many plants were lost. I hope you are now basking in that warm Florida sunshine that is more familiar! LOL! :)

Even Florida is not exempt this winter. Here in Colorado it is warm, sunny and beautiful - who would have thought? Sally

What is going on? Who would have thought that Florida would have had such cool temps? My sister and her daughter and children came from Fl to Ar for Christmas. They had to buy jackets, because it was so cold. When they got home, they were glad they had them! laurie

What a surprise for you!
I will trade with you any time Sally,but I suspect yours is the better deal...I cannot wrap my mind around places with no snow.. I do not have that experience...I sleep in heavy fleece PJ's Sally, I wear heavy wool socks to bed !!
Diane

This Global Warm is freezing everything...

i too need some warmth and sunshine! our temperatures are at least as cold as yours the only difference is we are used to it and can prepare for it! good luck staying warm!

I am used to the cold living in New England. This morning when I left for work it was 11º outside. I felt badly for a little boy in my class who went to Florida last week for a vacation. It was too cold!

I hear there is a warming trend coming this weekend. I feel badly for the farmers who are loosing their crops and the prices we'll have to pay because of it.

No, that certainly does NOT look like the Florida I know. 29*!!! That is brutal.

I am just waiting for them to change the "Global Warming" signs to "Global Cooling" on the government offices. Someone should take a look around the world right now.

Wow Sally, where's the Floria sunshine? I heard on the news that its been really cold there and not good for the Oranges!
Its been warm here in Southern California, today it was alot cooler, I really enjoyed the cooler weather. We had frost a couple of years ago and it turned my Palm Trees tips black. Those poor Palm Trees back in Florida. They can't take cold weather.

I asked the same question, Sally, LOL! I was in Tampa this past weekend and let me tell ys, it was cold. And it was cold in my daughter's home downstairs. She said they coul dnot turn the heat up because if they did, it gets too hot upstairs. I guess FL. homes just do not have the right distribution of heat in very cold weather. They're just not used to it....Christine

Sally, I am hopeful today my Florida home will get over 60 inside!! These Florida homes are not meant for this COLD weather that we have been having!

As for Al Gore? What a joke! The man made millions over a total lie.

yep, when I woke up last week to 7 degrees, my first thought was "global warming? psh!" of course, now they have changed that to "climate change"....hmmmmmmmm.

I can feel your pain, we were hit hard down here in southern Texas as well. I have a palm in my backyard that is hanging in there despite repeated nights below freezing this past week!

You have had some cold weather down there! Sally, I hope that you stay warm and don't freeze!

Being cold down there is almost harder than being cold here, Sally... I'm sorry that you have had so many cold days. Hopefully it is over now--and that your state doesn't have too much damage especially to the citrus.

Hi Sally
Isn't that something?? Not nice for Florida and Floridians or visitors to Florida either. Oh my. Geez we had warmer temps here today...we were at about 31C. We do have the snow though. Your skies are looking so threatening...I hope it warms up soon.
have a lovely evening
Judi

I wonder if it's ever been that cold in florida before. That is a sad situation. What about the fruit trees? I hope they will be able servive the low temps. I hope it doesn't last long.

It seems very strange to see frost on your roofs.

It is sad that you have had such devastating cold. Extreme.

Morning Sally, Well, I guess change keeps us on our toes, but I hate the cold and I am sure you all were not prepared for it. Glad you got the card, sorry it was late.
Hang in there, we are having a heat wave in Texas, it will be in the 50's here today.
Barbara

Susan (Between Naps on the Porch) said...

We had those same bitter temps...I totally feel for you. Those palms look so sad. Hope they recover ok. I'm participating in Blue Monday this week...yay! :-) Now if my brain will work and I just remember to come link up! Loved your Global Warming comment! LOL I've thought the same thing a million times.

Oh my Sally, Florida 29F?? Hohummm if it is Michigan that is understandable. Oh well I hope it will warm up soon....keep warm and be safe. The road might be sleek. ^_^