I began blogging June 13th, never thinking that I'd learn things. Well, I've learned plenty. I've learned that every blogger needs to shop at Ross, Marshall's, and Target to find certain items for their home. They should acquire an apothecary jar, a cloche, and a pair of bird salt and pepper shakers.

I got the apothecary jar from the store whose name begins with R. There's an embarrassing story behind this, but you'll have to go here to read it. I'm not putting that in print twice! 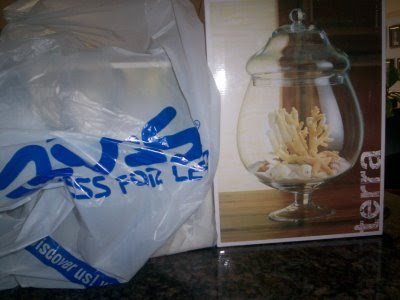 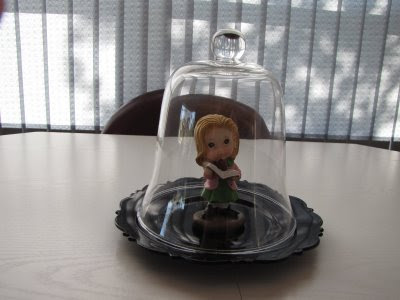 Then, this week, just in time for Easter, we stopped at another T store, and look what was sitting on the shelf just waiting to fly into my home! They don't even look tired, and yet they came all the way from China.

These birds can talk!! They've told me that their names are Rhett & Scarlett. While they were perched on the shelf, waiting for me to bring them home, they heard so many people talking about sending tea bags to Washington, D. C. (I think that they have some plans for April 15th.) 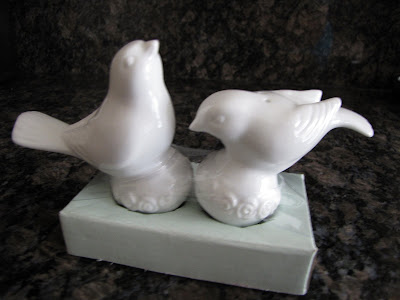 Because of Blogland, my home is undergoing a transformation. Before you know it, I'll be spray painting my furniture with black paint!

I want to find me a cloche too. I agree with you, I have learned a lot from my blogger friends as well. This was a fun post.
Judy

I'm here to send my wishes to you, that you have a wonderful, peaceful Easter holiday. If you don't observe, have a great weekend too!!

Sally this was so funny and so true. I think those stores that begin with a T, R and M owe us all a debt of gratitude.

Sally too funny and so true girl..Glad you got your birds...can't wait to see what peeps do with them on the 15th. May you have a great Easter...hugs and smiles Gl♥ria

Oh the peer pressure we endure once we begin blogging!! Cute post.

I'm glad yo got your bird S&P's, I didn't want you to feel left out! I ran over to our Dollar Store and I missed out on the chocolate bunny- drats! (But I did get the Bunny-on-a-stick from Pier One - LOL). I saved a cookie for you! - Happy Easter! ~ Robyn

Yep I remember your embarrassing story. LOL! I don't have any of those things yet which I guess makes me not an official blogger at this time. Heehee.One of these days maybe I will get at least the cloche. I heard about the story on the S&P birds. Don't know yet if I will get some. Depends on whether I have time to get them and if the T has any left.

I didn't know bird salt and pepper shakers were a trend, but those are very nice!

oh dear, I'm behind. I have spray painted some of my furniture black but have none of these three items. Probably cause I'm too cheap and haven't come across one second hand!

Hahahahaha Sally, you are just cracking me up!!!! Yep, once I joined blogland I too had to have the 3 coveted items...the cloche, apothecary jars and the birdies!! Now I have more than I probably need of them but LOVE them anyway. I think we have made it to the top!!!!!...lol

Oh, and I'm sure your black spray paint is not too far behind. I already jumped on THAT band wagon too!!!!!

They say confession is good for the soul. I don't have any of the above....well, at least yet. Had it not been for blogging, I probably wouldn't even know I was missing out on them!

Happy Easter to you and yours, Sally☺

Morning, Most Smiling One! Yes, blogland changes us all! Makes me want to go out and buy stuff - just like you! I'm so glad you're on the boat with your cloches and those birdies! Now you can join us on Wed. at Susan's Between Naps on the Porch as the birdies fly off the table and live real lives!
Oh, I just knew we would be the same! Two of us? How precious! :)
Be a sweetie,
Shelia ;)

Alas...I have no M's or R's, where I presently reside, but I believe that a trip to a T will be in my very near future.
Thank you for enlightening me today!
Please think twice about the spray paint...some new trend is surely, right around the corner;-)

Well I do need to catch up!!LOL!
Will have to check out my "T" Store for the precious pair.

I have a black table in my front hall...does that count? Love black iron, too!

TEE HEE....you are so right on the money, Sally girl. It is just amazing what a hold these bloggers have on us. I have seen more birdnests, eggs, birds, bell jars, and CHOCOLATE in the time I have been blogging than I have in my entire life!! Just amazing!
I went to Target just last night and all the white birds have flown farther South, I guess...Nary a one on the shelves. I guess not!! Every blogger in Blogville has at least ONE pair. hahahaaaa I just love it!!
As for painting your furniture black...THAT'LL BE THE DAY !!
XO and smiles, bj

Fun post! Those stores need to give a discount to Blogville. They do get a lot of advertisement in Blogville. I don't have the bird s/p shakers, but I did finally get a cloche last week! laurie

You made me laugh out loud! This was really cute!
I bought the last birds at T this week and placed them in my cart on the way to the toys with my litle granddaughter when she aid, "Nana, it is my birthday not yours!"
She really is a sweet and considerate girl... just a little excited to find her special items. LOL
So with HER shopping expedition I too got a birthday gift:)
Isn't amazing what blogland turns us into? My hubby doesn't get it?
Thanks for the smile!

Ok, I was smiling through the first parts of your post, but I laughed out loud at the thought of you spray painting furniture black. We'll think your blog has been hacked if you post a picture of black furniture! LOL!

Good one Sally! Because of my friends in blog land, I have more dishes than I could ever use and have run out of room to store them! Besides those stores that start with T, R & M, please add add Home Goods to the list! ☺♥☺ Diane

You are so right. And those who don't blog juat wouldn't know what you are talking about. This made me chuckle.

Cute post, Sally.... We do 'learn' from each other, don't we???? The one thing I know I've learned is that we are all unique, individual, different --but very loving and caring human beings!!!!!

I will send my tea-bags to the moon if I felt like it would stop some of this spending by our govt.... We are surely leaving a MESS for our grandchildren to clean up!!!!

You are right....I have learned a lot, this morning is no different. I sadly admit I do not have even one of these all important things! Love the bird Salt and Pepper shakers...I guess I better get in gear....before it is a new must have and I fall further behind!

love those birds!!! and those are some of my favorite stores...only we don't have a R or M here in little rock...so sad. I have to go to Dallas to shop there!!

Oh yes, I agree. A person can learn a lot from blogging, maybe even more than we need to know. There are bloggers out there that have forgotten more than I will ever know about blogging--or anything else.

I love Rhett and Scarlett. :) Perfect names for the birds.

The whole family is proud of our oldest for joining the army. There's been at least one generation in the military going back to a great great great grandfather and he's the next in line.

You are so right ~ I have learned about more new 'things' than I ever thought possible here in blogland. Happy Easter, dear blog friend.

Which just goes to show that you can teach us old gals some new tricks...

Sally... thanks, as always, for leaving me with a smile...

You are so right! Blogging causes me to shop, spend money, and get things done! I love it!

I still don't have the little birdies though. I have to work on that.

NO NO Sally only spray paint in Pink or Blue.
LOL
Happy Friday and Happy Easter.
Love Claudie
xo

Cute post! I love those little white love birds. I got some bigger one's recently from the store starting with the letter "M"
:)

Cute post, Sally ~ We do learn about lots of things we want to buy.

LOL, it is habit forming isn't it, I haven't gotten the first 3 items yet...we don't have any of those store in our town,...will have to make a trip to Jackson to find them...but I have started spray painting some furniture black and guess what? I kinda like it...lol...

Rhett and Scarlett are lovely. I'm so glad you finally found them. I don't have any of the three items, I guess I don't go to R T or M enough.
I hope you have a WONDERFUL Easter!!!
*hugs*

Hi Sally,
This post is so cute and funny...and has LOTS of truth to it!
:) Diane

Sally,
I am so glad you are a part of blogland you bring so much fun and joy. I love your outlook on life, You are such a faithful blogger and friend. When I am out blogging I see where you visit so many of us and I know it takes a lot of time to visit, I am very grateful for you.
Wishing you and your family a most blessed and joyous Happy Resurrection Sunday.
Sue

My goodness what a stir I caused you about the Cloche, hehehe. When I prepared my post about the apothecary jar , I couldn't for the life of me remember what they were called, so I just called it a cloche ! Sorry I caused you all of that embarassment Sally ! Red face here too !

Who knew we needed all those things?
Alas, I am birdless.
Maybe I can adopt!
Happy Easter!

Have a lovely Easter.

I don't have any of the items but the black spray paint. I keep cans of it. I use it all the time. Kathy

Very cute. Blogland is so interesting and does teach us things. :)

LOL about the black paint, Sally! :-)

Funny post! Yep, we've all been there, done that! All shopping at the same stores! Just doin' our part to stimulate the economy!