Please leave a comment for me; I guarantee that I'll visit and leave one for you. Visit other Blue participants by clicking on their links and leaving comments. If it's too much for one day, come back later in the week.

The Tampa Bay area's most beloved dolphin is returning to the big screen.

Winter the dolphin lost her tail in a crab trap and learned to swim using a prosthetic tail. Her story became the inspiration for the movie Dolphin Tale, which was released in 2011.

Now the sequel, Dolphin Tale 2 has hit the theaters. The movie focuses on a new baby dolphin named Hope, who also lives at the Clearwater Marine Aquarium.

With a nod toward the color of water, a Blue carpet was rolled out for the premiere of the new film, "Dolphin Tale 2" held here and in Los Angeles. Here's a picture of the the Blue carpet setting that took place this past Wednesday in Clearwater, FL (about one-hour away from my home). 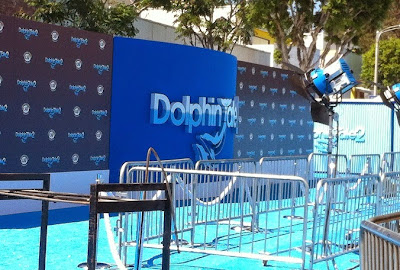 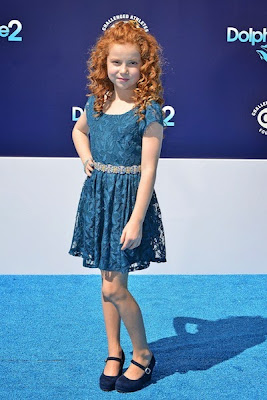 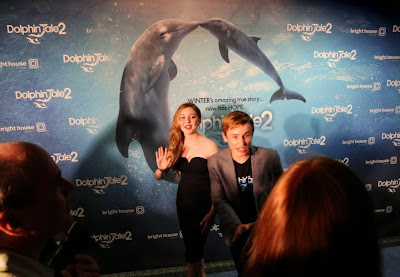 "Dolphin Tale 2" stars Morgan Freeman, Harry Connick Jr., Ashley Judd and Kris Kristofferson, and was filmed around here, including the Clearwater Marine Aquarium and in the Bay News 9 studios. 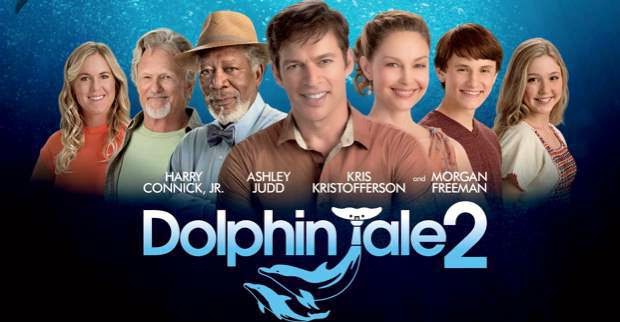 I've never been to a film premiere. Have you?

What a cutie in blue she is. Happy blue Monday Sally

Cute blue dress and shoes, but her hair looks gorgeous!

So much blue! I've been hearing the film advertised. Such a cute redhead in her bluegreen dress and shoes! They have quite a cast.

Sally, I have never been to a premiere either. It would be fun. Love the blue. Have a happy blue Monday.

Adorable girl in the 'Blue Premiere!' I'm sure my G'Girls will love this movie.
Have a wonderful BLUE Monday and week sweet lady.
Thank you so much for hosting.
Hugs,
FABBY

Hi,
I've got a very blue gate for you and I hope, this tool for uploading will work ;-)
Otherwise her my link: http://www.traumalbum.de/zutritt-verboten/
Love
Sabienes

Those are some gorgeous blue shots

**sigh** I am completely smitten with all your wonderful blues this morning! **another sigh**

I've never been in a movie premiere.
Very lovely girl! I'm interested in the movie.
www.1sthappyfamily.com/2014/09/railway-bridges.html

I would love to go to a movie premier...and I want to see this movie...I love every one of the stars.
Thanks so much for hosting.

Thanks for you pictures, Sally...have not yet been to the movie, but will probably go this week. Looks cute.

We all enjoyed the first movie and plan on seeing this one too. I've never been to a premier but wouldn't it be great.
Ann

Hi Sally, nice lot of blues in that special event. Sounds like a good movie, too!
Yes, I've been to a premiere of an Australian film here in Oz. It was "Red Dog" released in 2011. Excellent film:
http://nicholasjv.blogspot.com.au/search?q=red+dog

Sally, what a great opportunity to capture stunning blues. Thanks for sharing.

It would be wonderful if we saw some dolphins where we are on the Gold Coast of Australia this weekend, I am keeping my eyes out!
Thanks for hosting!
Wren x

Thanks so much for hosting and for visiting!! You stopped by before I could leave a comment because I had a phone call that I had to take!! LOL!! Hope you are well!!

Have never been to a movie premiere and been a long time even to see a movie. That little girl is adorable. Thanks for another neat blue feature.

Awww my kids are dying to see this movie. Have a great day Sally

This is definitely a movie for all ages, and I am anxious to see it. Beautiful Blues as always in for this Movie Post. Thanks for hosting, Sally.
Sue at CollectInTexas Gal

My first time visiting. I must saw I love the concentration of 'blue'. Ms. Capaldi is very fetching. MB

Dear Sally,
I'm sorry that you can not recognize the blue background
I just thought it´s blue-gray.
The next post is bluer :-)
Have a nice day
jutta

Hi Sally, I have a bit of blue in each photo on my post today. Thank you for hosting Blue Monday, love joining in.
Joy

Thanks for being so helpful. MB

Very interesting post, Sally! I have strong feelings about dolphins and whales. I had the experience of swimming with a Beluga whale many years ago off the coast of Ingonish, Nova Scotia. I am happy this dolphin is now able to swim. I wonder if it would have been possible to put her back in the wild. Your photos, and especially the one of the girl in blue are just stunning. Many thanks for hosting!

Happy to be back at one of my favorite places!!!

Sorry my message was so confusing...I was outside and hard to see my phone screen to type

No, I've never been to a film première either! Looks like one the kids will love :-)

Have a great week,
Sarah

I can no entrance in Linky Widget
have a nice day
http://louisette.eklablog.com/diner-in-the-sky-a-mons-au-pass-a112493870

love the little redhead girl in the blue dress! Reminds me of me when I was that age!!

I need to watch this when it comes out. Today I am getting the first one at the library since I have not seen it as of yet. Happy Blue Monday ;)

Very cool post. I would love to see the movie.

We loved the game on Sat night. And...we hated it too. We were on pins and needles the whole game.

We drove home from Jax on Sunday with only a few hours of sleep. Today starts the County Fair and we have a flower show to do with the garden club. Busy day to say the least. It lasts the whole week.

always fun to see what your up to in blue Ms. Sally. Have a great week! Hugs, Anne

Dang - I missed the linkup, and I have a lovely blue bucket in one of my shots. (Sigh.) But you can certainly share a link at my place for Wordless Wednesday (on Tuesday)!