Made it: One Half A Century! 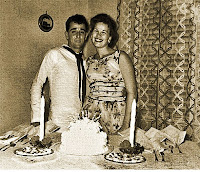 A wedding is an event, but a marriage is an achievement. - Unknown

At 1:20 pm, Monday, July 7, 1958, a scared young couple took blood tests and said "I do," never realizing how quickly the years would pass. They had only known each other for two months and four days! Everyone said that it'd never last! But they were in love, and they knew better.

Now, fifty years later, some still have a hard time understanding why this marriage has lasted. Here are several reasons:

1. Their home is Christ-centered. At age twenty-seven, the husband accepted Jesus as his savior, and two years later, at age twenty-six, the wife made that same commitment. They brought their two children up in the ways of God; they attended church. Grace before meals was a given--still is. Family devotions were held each evening at 7:00. The Bible became the book of guidance.

2. The couple are best friends. Every Friday night was Date Night. There were lean years when they couldn't afford a night out, so they would simply walk the mall. They'd get a babysitter or pay the oldest child a small amount. They know one another. You can ask one an opinion question, and the other will know the answer. However, they are not carbon copies! There is an occasional squabble. But underneath, the foundation of love exists.

3. They respect each other. Years ago, they made a promise to not make jokes at the other's expense or speak badly about the other in public.

4. There is trust. Neither have ever played the jealousy game.

5. They laughed. They sang. They even used to dance! They enjoyed their life together.

6. They believe in the word, "commitment." They made a deal. They said, "I do," and when things got tough, they still DID.

Today, fifty years later, they celebrate their Golden Wedding Anniversary!
Posted by SmilingSally at 6:00 AM

Happy Anniversary!!!!! You have a marriage that we can all look up to. :)

Wow! Well done Dad & Mom. Thank you for providing a great, Christian environment for me to grow up in. Love you.

It is amazing that i share the bloodline with a love like your grandma! I am so thankful to be able to celebrate 50 years with you today. Happy Anniversary! I Love You!

Congratulations! That is truly wonderful and a wonderful testimony to how good God is.

Awwwwwwwww. So very sweet and touching to read. I love it Sally, thanks for sharing. Those rituals sure paid off.