What American accent do you have? 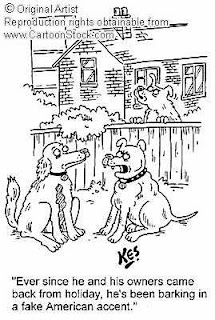 I love to play on my computer! The other day, I found this quiz that asks whether or not I have an accent. Being totally confident that I had no discernible accent, I took the test. My Result:

Your accent is as Philadelphian as a cheesesteak! If you're not from Philadelphia, then you're from someplace near there like south Jersey, Baltimore, or Wilmington. if you've ever journeyed to some far off place where people don't know that Philly has an accent, someone may have thought you talked a little weird even though they didn't have a clue what accent it was they heard.

They nailed me! I was born in Pennsylvania and raised in Washington, D.C.--close to Baltimore!

Here's Johnny's result, which was also spot on:

"You have a Midland accent" is just another way of saying "you don't have an accent." You probably are from the Midland (Pennsylvania, southern Ohio, southern Indiana, southern Illinois, and Missouri) but then for all we know you could be from Florida or Charleston or one of those big southern cities like Atlanta or Dallas. You have a good voice for TV and radio.

I can't believe that all these years whenever I have heard Johnny (who was born in Ohio and moved to Miami when he was fifteen) "mispronounce" a word, it's been MY ERROR, not his!

Give it a try. How do you fare? Leave me a comment and share the fun!
What American accent do you have?

Midland for me...I'm from Florida. Which I thought they missed until I read the last part of the description. :)

I couldn't resist that one. It was right. Midland. I grew up in southern Ohio. It also said I have a good voice for TV. :0)

Thanks for always providing such insightful comments on my blog. I love it. Have a great day.

Oh fun. I've taken this before and I have the Midland accent too. Grew up in Illinois/Indiana. :)

Right on the money for me.
My accent is North East.
I was born and raised in Northern NJ.
You can hear my accent here.

North Central (Canadian) for me. Hmm... I don't know about this one. English is my second language and I've lived in the South my whole life.

Oh, gosh, like mine isn't obvious. Been in FL. for 10 yrs and folk STILL make fun of my Chicago-jive! But secretly? I'm proud of my accent and BTW...it's POP not soda!

I got Northeastern. I don't really know what that means, but it's go to be inaccurate because I've lived in New Zealand my whole life and definitely have a Kiwi accent! I wouldn't be surprised if I'm picking up a very slight American accent from watching US television though, lol.

i have a mix between...ummmmm?

Mine came out "West", and I grew up in Colorado. When I came to MN, I thought everyone here had an accent, but now when I go back to CO, I can hear that I have picked up that Minnesota/Scandinavian flavor.

I took the quiz and my result was Midland. But really I think that's because I've chosen to pronouce words the most "correct" way. Really, I grew in in Texas but stubbornly refused to have an accent.

I never thought I had an accent, just pronounce certain words in the "New England" way but according to the quiz I'm Inland North! I don't know about that one.