I Finally Did It!

I've been watching everyone in Blogland as they fallize their homes, and I finally joined the club! I've decorated my home for fall. First, I bought this yellow-weed thingy that looks fallish and stuck it in a bud vase that I already had. I could see the fake stem through the clear glass; how sad is that? So I sent Johnny to Michael's to get some paint and a brush. I have NEVER done any painting like this before! 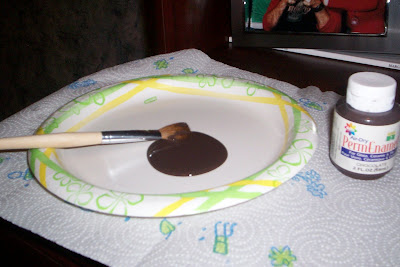 We wiped the vase off with alcohol because I read/heard somewhere to make sure the surface was clean so that the paint would adhere. I couldn't figure out how to paint without getting myself all messy (as I am quite prone to do). I did not want to touch the vase. Brilliant Johnny got out one of his golf clubs, stuck it into the shredder, (Note: he did NOT turn on the shredder!) stuck the vase on the end of the club upside down, and wah-lah! It worked perfectly! 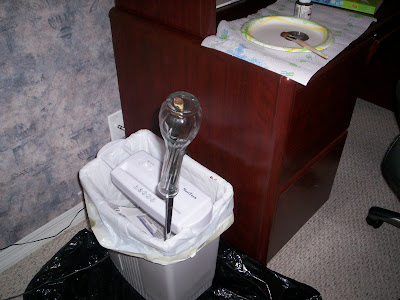 Here's the finished product with the yellow-weed thingy! 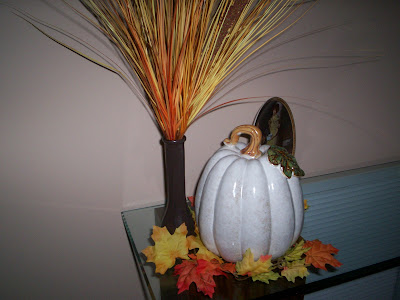 Doesn't the solid brown bud vase look better than if I had left it clear? Now, the fake fall weeds look so real that no one would ever guess I bought them at Walmart! The leaves look real too (ahem). And everyone knows that all pumpkins are white ceramic! 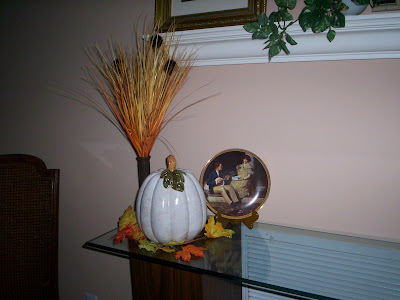 Here's a picture of our fallized Family Room. 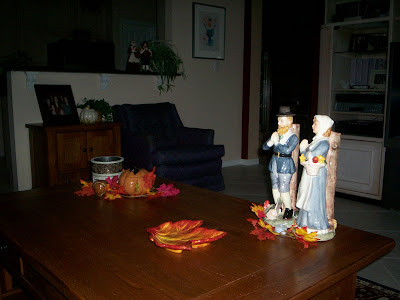 My pretty pilgrims proudly stand next to a non-fall plant. 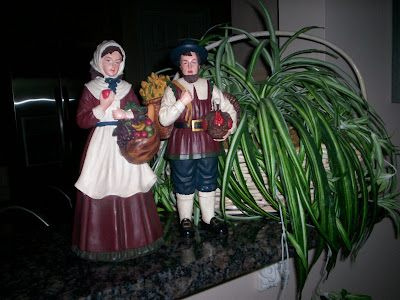 Here's the kicker! Dot showed off her newly acquired pumpkin that looked like the one she wanted to grab from BJ's blog. Dot told how she finally found and snagged her own, saving her from a life of crime. I left a comment telling her about my 39" diameter pumpkin and promised her a picture. You're all my witnesses now, if she tries to come and take mine! 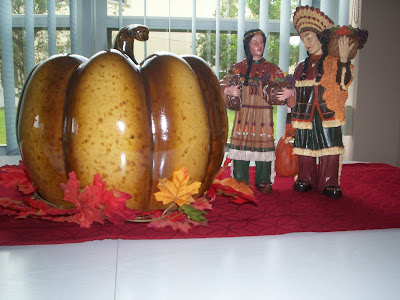 See how you influenced this Florida gal to fallize her home? Aren't you ladies proud of yourselves?

After you leave a comment, check out my sidebar for the current giveaway.

Your painted vase looks great. I still haven't tried doing a "makeover". I might try to get some fall decorations out this weekend.

That pumpkin in your last picture looks great. It sounds like it is pretty big.

That all looks great =) I love autumn colours. Hmm, I should get onto some Springizing... We only just took down the paper snowflakes I made for min-winter lol.

Sal, I think you did a great job. Your fallization looks beautiful! I haven't even started myself. I really like the white pumpkin. hugs, Ellen

You know what? That vase can be painted again when Christmas time rolls around.... :D

You did a great job fall-izing your home and I'm sure it took some effort to think fall living in southern Florida...duly noted about your big, brown pumpkin...LOL
;-) Bo

And you said you weren't crafty! Very impressive!

And I did it too! See my sidebar for a Blue Monday! REminds me of Henry Higgins in My Fair Lady when he said to Mr Pickering, "She did it, by George, she did it!"

Very smart to paint the bud vase. It does look much better than it would have clear. And you better be careful....Dot isn't the only one who might want to make off with the gorgeous pumpkin!

The vase with the sticks looks great!

Great job on the vase. Looks great now with the fake fall weeds. Congrats on getting your home ready for fall!

Sally, I am very proud of you. Living in Fl. doesn't lend itself to the fall feeling. Everything is always green. Love the brown vase, good thinking. Pilgrims and a big gorgeous pumpkin, and let me not forget the fall leaves. All festive and all lovely.

lol! Way to go girl! I love the idea of painting the vase like that and those pilgrims are perfect with Fall decor....and of course you know how I feel about that pumpkin!!!! I still have mine sitting on the kitchen counter...bay girl ask me every day..."mom..when are you going to put that somewhere?" I tell here I don't know yet..it is just so pretty I like looking at it here! lol Now don't you feel all warm and fuzzy inside having your pretty Fall decor out....makes you want to go make some sweet potatoe pies and some homemade chicken and dressing...huh...oh sorry...you're right...one step at a time! lol lol have a great day sweetie!

Seeeee Fall does come to Florida! You did a great job bringing in the fall colours. That was a great idea with your vase and the fall thingys in them and all. I like your pilgram couple.
Nice job!
Hope you have a lovely day.
Judi

Sally, I have two words for you. SPRAY PAINT! It comes in almost any color and is not messy. It is fast and easy. I have spray paint always close by. I use it all the time.It looks good. once you start you will find all kinds of things to spray. Kathy

Ramblins of a middle-aged goddess said...

Thanks for stopping by once again...I love decorating for Fall. If i had scads of money I would buy tons more but since I don't..I can't..I would rather decorate now than for Christmas...

I used to refuse to use white pumpkins because they looked fake...until I saw on a friend from Germany's blog that there is a variety of white pumpkins! I really like them now.

I haven't gotten my fall stuff out yet. I should. Maybe this weekend.

Very nice, Sally ~ with my house forever in the remodeling state, I am hot very inspired, sorry to say. I did put an autumn flag outside with flowers. I really do like those white pumpkins.

Oh Sally I love the way you fallized your home. All of your decorations are beautiful.You really got creative too. You see. You can't not cellebrate fall by living in Flordia. We just won't let you LOL

Oh dear me, Sally, I am really feeling the pressure now. I am catching this fall spirit, even though there is nothing close to fall going on around here. I think your decorations look great. Good job on the vase. Thanks for the helpful hints about painting it. Take care.

What a great idea, you did really good on that art project...I would have never thought about that...I am trying it too.

I love the pilgrims and the Indians. Everyone else can have the pumpkin, I'll take the figurines!! BTW, stop by my blog as I have an award for you, if you would like to accept it. Sally

I never thought of painting a vase like that. Cool idea. And your fall decorations look wonderful. :)

Yep, you are ready for fall. Well, I've started with my hutch. It's getting cooler around here now so maybe I'll be motivated to do the rest. ~ Robyn

Great to see you all the time, leaving me a little note! You sure make my day!!! Thank you! :)
I love how you decorated! You took the courage to paint something...I would have bought something, I am not very creative! LOL
I have yet to decorate, but I did put up some colored corn on the cob with husks, on my front door...sad, yes, I know....
Hugs and have a great Wednesday!
Beth Ann

woa, that yellow weedy thing is cool. and sure adds some happiness for fall!

thanks for coming by today. wasn't it a blast?
nice to meet you,
linda

I loved the word........"fallized".
It is tough to feel fallish when the weather doesn't indicate it at all. I'm experiencing that here in California too.

Your decorations would do just as well in New England. Now isn't that a compliment! In other words, Good job.
Kathy b

OMGosh...your fall decorations look FABULOUS. The vase looks super..I saw one on a blog yesterday that I can hardly wait to do...maybe this afternoon. I'll post it if I get it done.
OK, if DOT comes up with TWO hugh pumpkins, we're gonna know where she got it!! FROM YOU! I threatened her within an inch of her life if she tried to steal MINE so she's scared of me!!! heh heh heh

I think all your Fall delights look wonderful!

You did a great job!

If that is enamel paint, you can bake the vase and make it shiny if you like. Place vase in oven, then turn on oven to 350 and leave for a half an hour. Turn off oven and leave the vase inside until the oven cools. Remove vase after oven has cooled and it should be shiny and set. These directions are for Plaid paints but yours may have directions on the bottle if it is indeed enamel paint.
Have a great day!

Thanks for introducing this PA girl to Fall in FL. You've done a great job getting your home ready for Fall. Now all you need is a chill in the air, trees covered in brilliant reds and yellow, crisp warm apple cider and the "woody smell" of the seasons first fire. THEN you'd be completely drenched in Fall!

Your fall decorating looks wonderful! I need to get to doing some myself.