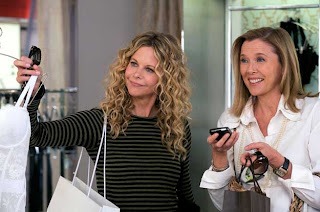 I talked my brave husband into taking me to see The Women this weekend. I had seen a couple of interviews on TV, read two posts of bloggers who liked it, and thought that it looked like a good one. We went in the afternoon, so the theater was pretty empty. Even so, poor Johnny noticed that he was the only guy in the theater, except for a baby boy!

We should have stayed home. What a waste of money. I expected a light-hearted chick flick. What I got was a film that dragged on so that I actually found myself getting sleepy. Really!

This predictable film had a scene that disturbed me. While visiting a spa, Meg Ryan's character, after finding out about her husband's infidelity, shares a marijuana cigarette with the character played by Bette Midler. (What a waste of Bette Midler's good talent!) Call me crazy, but isn't that stuff illegal? Is this what Hollywood thinks happens to middle America when a husband strays?

I say thumbs down to this one. What's your opinion?

After you leave a comment, be sure to check out the BOOK GIVEAWAY on my other blog Book Critiques.

I haven't seen it. I actually haven't been to the movies in years and years!

Hi Sally,
I haven't seen it yet. But I think alot of the stuff in movies could be left out and still have a great story!

I haven't seen it, but I had considered it since I usually love Meg Ryan. I'm annoyed with her plastic surgery, though...I keep wanting to take her aside and tell her she looked better before! Thanks for reviewing the movie! Now I won't waste my money. :o)

Sally, Thanx for the review. I thought it might be a good movie too but now I probably won't rent it. A movie that my sister and I want to go see together is that new movie Nights in Rodanthe with Richard Gere and Diane Lane. This movie is based on a Nicholas Sparks book. If we see it while my sister is visiting from California, I'll let you know how it is! Have a great day. hugs, Ellen

Interesting point...should check this movie out...

I haven't seen a good movie in a long time. I wish they would make them like they did in the good old days. I did love The Notebook. Have you seen it?

I haven't seen it yet either...I usually love Meg Ryan but it sounds like one that can be skipped. My hubby will be so glad!

Hi Sally
Did not see the movie and probably wont, but I have to say that you are my new HERO!! You actually got hubby into the movies to watch an obvious chick flick?! You go girl!! LOL!!!

I've not seen it, either. The best one of Meg's movies to me was
WHEN HARRY MET SALLY...I loved it!!
Thanks for saving me money on a movie I wouldn't like.
love, bj

I don't go to movies anymore. We just wait for the video. Then we can turn it off or fast forward through the offensive parts. I hope I'm not supposed to smoke dope when Bob cheats on me. I'm sure he won't though, so I don't have to worry. Ha! Ha!

Good morning Sally
I haven't seen that movie and I guess I won't be seeing it either. I agree I don't know why they expect that to be the cure of all. Too bad your evening out at the movies wasn't an enjoyable one...moviewise at least.

Have a nice day.
Judi

That's too bad - I was really looking forward to this movie! Have you seen the 1939 version with Norma Shearer, Joan Crawford and Rosalind Russell? Now that is a great movie! If you've never seen it you should Netflix it, since it seems that it may be the better version. :)

It didn't sound to me to be a very good movie, but what do I know? I haven't seen a movie in a theatre in years.

Thanks for your visit! Yes, Shelia, her mother and Chloe Dawn drove 9 hours away...but there was no word on Mr. Precious going with them. (I have a "link" to that post of Shelia's in my post, too.)

Hi Sally.... just hopping by to say hi.... good to see everything is looking wonderful here... :)

Have a lovely day

Hollywood has a way of putting all those controversial things in movies. I can't remember the last time I saw a movie. They have gotten so bad. I think THEY (Hollywood) are out of touch with US.

Thanks for the heads up on the movie. I, myself, would have been uncomfortable just knowing that my poor husband was sitting there with me. :)

Loved your "Johnny" post. We should all do one like that. It's amazing how similar the men in our lives are.

Hi Sally,my girlfriend wanted me to see this movie, but I should not waste my money after hearing what you have to say about it...

Today on my blog post , you ask me what kind of tree was in the Japanese picture?/ My husband said that the tree is a Cherry blossom tree.. Baba

Sally, another busy day with my cousin and therapy. It seems like I just can't get my visits in before late at night. I agree, our husbands are alike in many ways.I think they could be buds.

I haven't seen 'The Women' yet and maybe I won't. I can't see what could possibly be entertaining about a scene where a drug is being shared by two women. Illegal, being the bottom line. Thanks for the review.

Thanks for the heads up on this movie. These days I don't think there is much good coming out of Hollywood... people need the Lord. :-(

Sally,
Haven't seen teh movies...thanks for aharing what it's about. I will make sure I don't waste my money. I wish the would make moies that we can enjoy. You have a wonderful week Katherinellen

Ugh. Doesn't sound like my thing either, not that I go to movies terribly often anyway though!

I had a feeling this one could go either way. I'm sorry to hear that it swung towards the way I wouldn't want it to. I have it in my Netflix queue, but it will be a while before it's out on DVD. I was hoping it would be cute and light, not crass or vulgar in any way. Sometimes Hollywood goes too far for me :)

Thanks for the honest review!

Sorry to hear such a bad review--I had high hopes for this one as I love so many of those stars. I managed todrag my husband to Mama Mia--he loved it (in a goofy kind of way) and we had a great laugh at the lack of males in the theater. :)
*smiles*
Kim
(page after page)

I saw this movie a week or two ago and was disappointed as well. I was hoping it was more like Sex in the City, which I loved. Did you know The Women was a remake of the 1939 flick with Joan Crawford and Rosalind Russell?

Ohhh, I was looking forward to seeing this movie when it shows here. I'm not sure if I want to see it now in the theater. We'll see.

I thought some states allowed the smoking of marijuana in a particular amount? I'm not saying it's good just that that's how it is in some states.

I've seen the previews but never go to a theater to see a movie anymore. I do like Meg Ryan and Bette Midler..what a shame..you never know what Hollywood will show next, do ya?!

Have you seen the original? Get it from your library or Netflix. It's really good!