Max and the Man & Award

We pulled our car to the curb so that Johnny could jump out and search for his cellphone. He went around to the passenger side and opened the back door to see if it had fallen there. While looking, a cat came out from behind a pillar, took a couple of steps toward Johnny, and loudly meowed in a desperate manner. Johnny finally found the phone, right where he'd dropped it under his seat, and returned to the driver's seat.

Meanwhile, the cat returned to his hiding place. A man walked down the sidewalk with several grocery bags. He stopped, reached into one of the bags, took out a can of cat food, opened it, and tried to entice the cat. The cat came out from behind the pillar, but would not get close to the man or the food. The man dumped the cat food onto the ground and walked away. Then the cat began to hungrily gulp the food. I grabbed my camera and snapped some pictures. 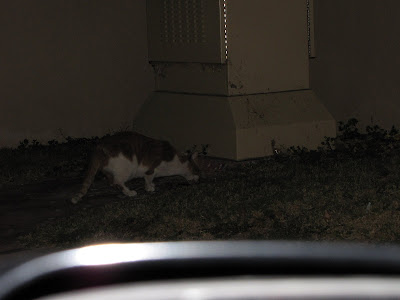 I'm working with a new camera, and I couldn't seem to get a good shot. This one is not much clearer. 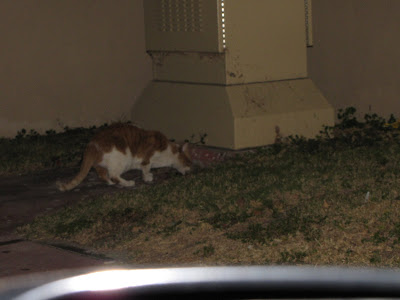 The man walked over to our car and explained. A lady used to regularly feed the cat that she called Max, but she had not been seen for quite a while. The cat had not eaten in three to four days the man said. He went to the store to buy food for his cats, and he bought an extra can for Max. He allowed me to snap this picture. 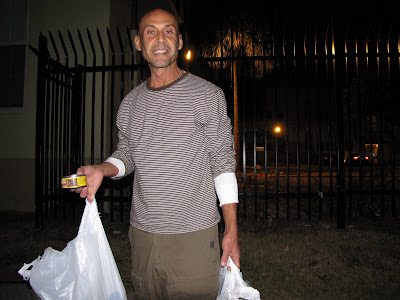 What do you think? Was he being a good Samaritan or should he have left Max to fend for himself?

P.S. This is a feral cat and not suitable for adoption.

Monica at Monica’s English Version has presented me with Let’s Be Friends award. 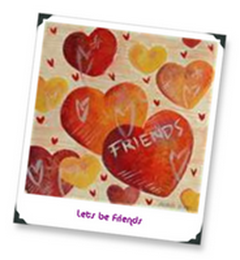 These blogs are exceedingly charming. These kind bloggers aim to find and be friends. They are not interested in self-aggrandizement. Our hope is that when the ribbons of these prizes are cut, even more friendships are propagated. Thank you, Monica.

I love this story! I think the man was sweet, knowing the cat was not used to finding it's own food. what will happen to the cat now?

Sally, Thanks for the help..and I don't know what I was thinking when I said Shelia.....like to say a blonde moment, but really a senior one.
Thanks again.

Sally, I think the man should keep feeding the poor cat. Here there are groups that deal specifically with feral cats, and maybe they should be contacted. I hope the cat doesn't starve. Poor thing. I love cats.

Congrats on your award, and you are "exceedingly friendly." That's one of the many reasons I like you so much!

Morning, Most Smiling One! Oh, I think that young man was doing a good thing. Poor little kitty! I thought you were going to say the kitty jumped into your car before Johnny could close the door!!
Congratulations on your award too!
Oh, we Daddy's girls must stick together. I'll bet your siblings picked on you knowing you were his favorite.
Be a sweetie,
Shelia ;)

Hi Sally, my mom feeds a stray cat who showed up at her door..once you feed them , they will hang around!!!

What is the name of your new camera?? I just got a new camera too..it is a Fujifilm Finepix 10 mp and 12x zoom..I am still learning how to use it..

Hi Sally
Congratulation on your award.

I think it was good of that man to feed the cat especially because he knows it hadn't eaten. It wouldn't be kind to know that and not feed him, however if he isn't planning to keep the kitty it may rely on him and hang around his place. Maybe he isn't feeding it right at his home. Its so hard to say.

Wandering kitties are often picked up by the SPCA and hopefully get new homes. That would be nice to happen to that kitty if no one takes him home.

I'm glad Johnny found his cellphone...and that gave you a chance to take pics and tell your story to us.

p.s. you do make me chuckle sometimes..
have a lovely day
Judi

I think that was very sweet of that man to do. I'm sure the cat was happy to be fed as well. I hope that poor cats finds a home and gets taken care of.

I love cats and help as many strays as possible. I personally think the man did the right thing. Now if only he could do this every day. We had a female cat show up a few months ago and got under our house. she had a litter of kittens there. All are wild and won't let you near them. All of the pretty weather days this week I have deliberately left my door open all day with food out for them. They are slowly coming inside each day and I am hoping eventually they won't be as wild.

I pray he keeps taking care of the cat. My good friend had a real colony of homeless/stray kitties that she has taken care of over the years. Many are not wild, but obviously had been taken care of at one time in a home. They could have been abused and, hence, the reluctance to be touched--they just want some food. Hopefully, this one will come around after receiving loving attention. You never know, but he's doing the right thing.

This was such an interesting story! Kudos to the young man for trying to help out the poor cat. I'm not sure what a feral cat is... wild? I'm split down the middle on this. On one hand I have learned not to mess with nature, wild animals have a great deal of difficulty adjusting back to the wild if they have become dependent on humans. Then again, being an animal lover, I couldn't turn my back on a hungry stray.

All I know is I would have fed the cat ... I love all animals.

To feed or not to feed--that is the question? What is the politically correct answer? Would the cat move on, find food someplace else? Starve? Become totally dependent on society? I'm leaving this open ended. Maybe the new adm. should be notified to see if we can pass a new spending bill to take care of this.
(Follow simple instructions about giveaways? If you think you hear a loud scream coming out of the Southwest--that would be me!)

What an unusual story. I tend to agree with Clif on this one, however, I would be tempted to feed the cat too.
Charlotte

Leigh of Tales from Bloggeritaville said...

Great story. If it a ferrel cat, I tink he did a great thing to feed it. I once treid to catch a ferrel cat,. MISTAKE. I ended up with a doosey of an infection. They dont like to be trapped. As an aminal lover, who wants to save them all and take every stray home, I say leave well enough alone. He is a survivor. Hopefully more people like that man will have a giving and big heart.

Hi Sally, I thought for a minute you were getting a cat. I think that would be a mistake. I'm glad the man fed the cat. Animals going hungry makes me so sad.

Have a great evening.

Oops, you can tell I am tired when I signed my name as 'Sally" Big laugh here.

aww what a sweet story ♥ Idk how I missed it. Congrats on your award :)

I would have done the same thing as that man! I have a real soft spot for animals. You don't know how long that cat was being fed by that person that left it may have started to lose it's hunting instincts.

Hi Sally - my nextdoor neighbour feeds a feral cat which lives in the allyway at the back of our houses. He even called in the RSPCA and they caught the cat, checked it over etc then realized it back into the allyway. I feel he and your gentleman are wonderful for caring so much. Judith

Well here I am not in action, but just wanting to say Hi.
Funny to stumble across your story today. Our little Sheba went into labor a couple days ago. Yesterday was a very sad day for all of us. She delivered only 2 babies and both little ones were not breathing. She is re-cooperating now and will be taken to the vet in 5 weeks to be spayed. No more babies for this mama. She has had her share. It just wasn't meant to be.
My hand is also re-cooperating from her biting me on Tues. rushed to the doctor's for a Tetanus shot and antibiotics and the swelling is going down. She did not like me cleaning her "bottom". Otherwise she is just a sweet little fur baby soul.
I love folks that feed stray cats. But, it's so true about "if you feed one, there will be two and three"... The organization that a volunteer for has many colonies of feral cats. We catch and release them. Most are not adoptable, but they do get vaccinated and spayed or neutered. If someone wanted to do the right thing it would be to "catch and release".
Just wanted to say hi Sally, and not sure when I will return. Just not yet.
Sending much love
Love Claudie
xo

I also have a dear friend that *catches and releases* feral cats after spaying and vaccinating them. In fact, our Henry is the son of one of her feral's. : )
Mama cat just was not adoptable but all her kittens found good homes.
The man has a kind soul...but he will have to keep up with the feedings as the cat will now come to depend on them.

At my work there is a colony of feral cats. We are located near a creek so that is a water source for them. Some organization has provided them with cat houses, like dog houses, for protection from the rain and for safety. Also there are people who drop off food for them. They always wait until I have left my car before they jump on the warm hood on cold days. I always have cat prints on the hood along with the other cars in the parking lot. The other day a large bird like a vulture or something was on the ground near my car eyeing the cats. All were hiding including a couple under my car. As I got closer the bird flew away. The cats usually keep their distance from the people around there.