After twenty-five years in the same parish, Father O'Malley was saying his farewells at his retirement dinner. An eminent member of the congregation--a leading politician--had been asked to make a presentation and a short speech, but was late arriving. So the priest took it upon himself to fill the time, and stood up to the microphone: 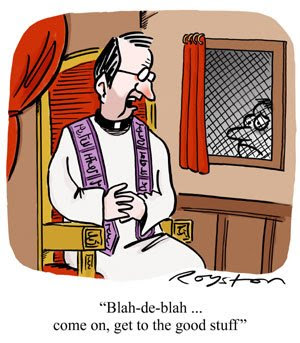 "I remember the first confession I heard here twenty-five years ago and it worried me as to what sort of place I'd come to. That first confession remains the worst I've ever heard. The chap confessed that he'd stolen a TV set from a neighbor and lied to the police when questioned, successfully blaming it on a local scallywag. He said that he'd stolen money from his parents and from his employer, that he'd had affairs with several of his friends' wives, that he'd taken hard drugs, and had slept with another woman and given her a disease.

You can imagine what I thought. However I'm pleased to say that as the days passed I soon realized that this sad fellow was a frightful exception, and that this parish was indeed a wonderful place full of kind and decent people."

At this point, the politician arrived and apologized for being late, and eager to take the stage, he immediately stepped up to the microphone, pulled his speech from his pocket, and began: "I'll always remember when Father O'Malley first came to our parish," said the politician. "In fact, I'm pretty certain that I was the first person in the parish that he heard in confession."

You've got to love being able to start you day off with a smile!!! Thank you!

I love a good joke!

Thanks for the smile, Sally. I agree with Dawn; it's a lovely way to start the day!

That was to funny! Thanks for making me smile. I hope you are having a good weekend.

Sally
Oh my goodness...just thinking about that and picturing the faces of people around that politician..the thoughts floating around that room. THAT is so funny! I love it. Nice to start a day with a good laugh even on someone elses behalf! *lol*.
Thank you and hope you have a really happy day..
Judi

Oh my! This made me laugh aloud.

Happy Pink Saturday. ;-) I am always happy to visit your blog. It makes me think of home.

Hello Ms. Smiling Sweetness! You're so funny and have good jokes, too!
Hope you have a wonderful weekend.
Be a sweetie,
Shelia ;)

This is a good one!!.Kathy

Thanks for the chuckle! I love a good laugh.

Funny. that is cute. what a nice "clean" joke.

OH MY STARS! How funny!
Where do you find these!!!