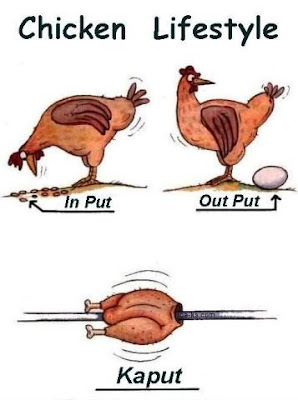 When I was a child living in Washington, D.C., my father came home with two chickens that he won in a card game. Yes, he had been drinking! Chickens are not allowed in the city--after all, this is the nation's capitol! We could not keep them. We didn't have much money for food...well, you get the picture.

Not too many days later, my mother, a city gal, who had no previous experience with farm animals, wrung one of the chicken's neck. I stood and watched. I am still traumatized by the memory of that headless thing flopping around the backyard.

Next, using scalding hot water, she removed the feathers. Whew! What a smell! I don't think that thing EVER took a bath!

Chicken dinner was served that night, but I ate none of it.

All childhood memories are not pleasant, are they?

I don't think I could have eaten it either. I'm not sure I would have ever made it as a farm girl.

You are right. Not all memories are pleasant.

I had a similar situation with rabbits. My uncle had a farm and they raised rabbits in addition to other things. One day he killed a rabbit and skinned it in front of me. My cousins were used to this and it didn't seem to bother them at all. I however was tramatized. I was expected to eat it but I just couldn't do it. Your right, not all childhood memories are pleasant.

Morning Sally! Oh, that's funny! My grandfather and grandmother lived on a farm in Alabama, where I grew up, and I remember him grabbing one of those chickens and wringing the neck like that. I was so amazed the thing would run around the yard - like a chicken with it's head cut off!! Well, popped off! I guess I saw it done so much, it didn't bother me at all. My granny could fry up some good chicken!! Yep, I'm keeping Mr. Precious!!

Be a sweetie today,
Shelia ;)

Well, here I come again oh Diva of Gorgeousness. Remember you can always snap again!!
Be a sweetie,
Shelia ;)

LOL. My Dad came home one time with a goose and 5 baby chicks. He got them from the fair. We got a second goose a week or so later to keep the first company. And yes, we lived in the city too. LOL. I'm not sure what he was thinking, but those two geese became our best buddies and gave us a memorable summer for sure. We ended up giving them to friends who lived on an acreage, and we never asked but I'm sure they probably eventually made it to their dinner table. My sister and I would have been heartbroken if we found that out, they were our pets after all. So we just convinced ourselves that they too were treating them like the spoiled pets we made out of them.

I think if I had seen that I wouldn't have eaten chicken ever again. My parents never killed an animal purposely so to speak... but my dad use to love to get rid of cats that I loved and he hated. And did things like sneak one cat that I had with her kittens and take them to ASPCA around my birthday after telling me I could keep the cat. That wasn't the first time he had done something like that either even to my mom. Good old dad not an animal lover.

yes, I have seen that too...not pleasant. I have also seen a sick momma cow have her throat slit, even worse. I will NEVER forget that one!

I don't blame you for not eating chicken that night. I hope you can eat chicken these days without thinking of that episide.

On an egg story. My youngest son always wanted to have baby chicks. When he was in kindergarten the class went to visit a farm. When he got home I noticed his pocket was wet and sticky and I asked him about it. He looked down sheepishly and told me that when they were shown the chicken coop, he had taken an egg and put it in his pocket to take home (to hatch). When he got on the school bus he forgot and when he sat down the egg broke in his pocket...*lol*.
That chicken story IS a happy childhood memory.

sounds yummy! i can see why you didn't eat that night. Love the Gold seal. Way to go!

Oh, my goodness, that is terrible. I am surprised you can ever eat chicken.

I saw my grandma who lived on a farm kill 2 chickens for our dinner that night she chopped their heads off with an ax!! Never forgot that sight still remember it today some 50 years later.Just like you I was a city kid and never saw things like that.Won't say it traumatized me but I sure remember it like yesterday.Ewwwwww!!!
Diane

Ick! My Mom had a similar experience with a cow she helped raise. They were all at the table and her Dad said, "well you know where the meat came from." Mom ran from the table crying. Nope not all childhood memories are great.

ACK! Traumatic for a chicken-lover like myself. But it's amazing how far removed we are from the whole process of how food ends up on our plates.

That story makes me go eep! We had chickens when I was growing up but I grew up rural and Mom knew what she was doing. I think that experience might be a little out of place to see too if I'd been in your shoes.

Ewwwwwwwwwwww! I don't think I could eat a chicken after watching it lose its life. I don't know how women did it back in the day. Yikes!

I grew up in Maine an the worst we had was boiling the live lobsters but that didn't stop me from eating them.

Thanks for stopping by my blog and commenting. Its nice to have visitors! Have a blessed week.