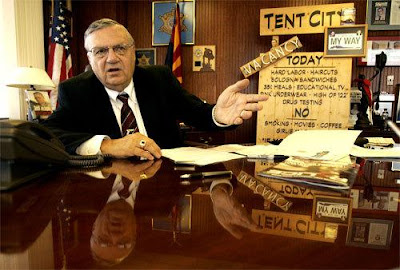 Valerie sent this to me by email. I checked it out with Snopes, and it's TRUE.

Maricopa County was spending approximately $18 million dollars a year on stray animals. Sheriff Joe offered to take the department over, and the County Supervisors agreed.

The animal shelters are now all staffed and operated by prisoners. They feed and care for the strays. Every animal in his care is taken out and walked twice daily. He now has prisoners who are experts in animal nutrition and behavior. They give great classes for anyone who'd like to adopt an animal. He has literally taken stray dogs off the street, given them to the care of prisoners, and had them place in dog shows.
The best part? His budget for the entire department is now under $3 million.

The prisoners get the benefit of about $0.28 an hour for working, but most would work for free, just to be out of their cells for the day. Most of his budget is for utilities and building maintenance. He pays the prisoners out of the fees collected for adopted animals.

The rest of the country should take a look at the way he runs the jail system, and copy some of his ideas. He has a huge farm, donated to the county years ago, where inmates can work and grow their own fresh vegetables by hand. He has a pretty good-sized hog farm, which provides meat and fertilizer. It fertilizes the Christmas tree nursery where prisoners work, and you can buy a living Christmas tree for $6 - $8.

Would you vote for him?

Morning Diva Sally, Yes mam, I'd vote for that dude. I like the way he's doing things. I never did understand why folks behind bars didn't have to do much! As a little girl growing up in the deep south, Alabama, we'd see chain gangs along the highway working or in the fields working and yes, they actually had on the ankles cuffs.

Thanks again for participating in my Bathroom Beauty Snappers challenge. You look so mahhhhhhhhhhvelous, Darling Diva!
Be a sweetie,
Shelia ;)

I remember reading about him. We need more people like this man running our towns and cities. What a smart, smart person he is.

I was just thinking today how much less welfare would be needed if prisoners had to work to pay their child support, and if they didn't pay, they'd be put in prison and forced to work to pay it. No exceptions.
I used to live in AZ and even got certified in Maricopa county to be a crisis pregnancy counsellor.

I was joking about being old, lol. I would LOVE to have another baby right now, so I must not be feeling too old, hehe.

Sally-- Thanks for stopping by to read about my chairs. Yes, you can see where the chair was whittled to release poor Johnny!! Every time I dust, I run my finger over the spot and think of that day. Enjoyed your post today - good food for thought. Sally

That's amazing. Good for him! I'd vote for him.

My name is Sam, and I live in Phoenix. I appreciate your exuberance about our current sheriff's practices concerning animals. However, his dealings with humans demands a less positive response.

The taxpayers of Maricopa County have already shelled out over $40 million worth of lawsuits due to the sheriff's horribly run jails. He barely feeds his prisoners, and with green bologna and moldy bread when he does. Inmates have routinely been beaten, shocked, even killed unnecessarily. In fact, Amnesty International has condemned the jail system of Maricopa County.

Beyond that, the current sheriff engages in blatant racial profiling by invading neighborhoods with high Latino populations and arrests people suspected of entering the country illegally. The only probable cause needed: being brown. There have been multiple cases of legal citizens being arrested for no other reason than having brown skin.

As I Christian myself, I value human rights and see it as a call of faith to fight hard against injustice. With this in mind, I urge you to dig a little deeper into the current sheriff's history and current actions before endorsing him fully.

Thank you for the space to express my opinion. I'm looking forward to hearing from you soon.