I'm Addicted to the Olympics 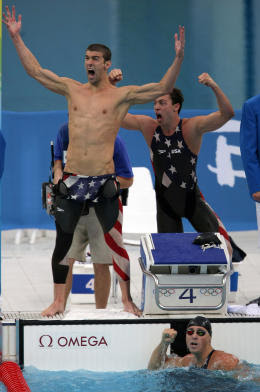 First, a disclaimer: I don't usually watch sports. I am married to a sports nut, though, and the Olympics are on. That means our television is on NBC. I can't help but see some of it, right? Well, it happened; I'm addicted!

Michael Phelps has got me hook, line, and sinker! I've missed so much sleep staying up to watch him pile up the gold, that I can barely type!

President and Mrs. Bush watched in the stands and cheered as Phelps won his first bit of gold. That made an impression on me as I watched Laura Bush yelling at the top of her lungs.

This is a shot of Phelps just after winning gold medal number two in the four-man relay race. That's the race that really hooked me. The French had bragged that they were going to smash the Americans, and the American announcer seemed to agree with them. Hmm, someone please tell me how silver smashes gold?

He won another gold medal after that relay race, and Tuesday night, he won two more.

I'm not alone with my addiction. NBC is credited with having "the largest audience ever recorded for the first Sunday of any Olympic Games broadcast." The world is watching this young man become the most decorated individual athlete in the history of the modern Games.

Tonight, I plan to watch again as Phelps continues to pile up the gold. In fact, if you want me in the next couple of days, I'll be glued to the television. I hope Michael Phelps wins them all!

I know what you mean! I'm not a sports fan at all but there's just something about the Olympics. I was surprised how tense I was watching our rowers in their heats. My country has yet to score any medals, haha, but all the athletes are so impressive that it's still fun to watch. I'm especially enjoying the gymnastics - they seem almost superhuman!

You and my hubby would get along well. He watches the Olympics every night while I sit reading my book Twilight :>)

Wow. I haven't been keeping up with the Olympics at all, but that's amazing!

Michael Phelbs is great! I always go "run, run, run" when he's swimming and my brother reminds me that he's not running but swimming. Then I tell him that I'm just excited for him to rush and finish super quick and that's why I say run.

Anyway, I'm still watching him swim and win everything. I'm also a Natalie Coughlin fan and most definitely a Shawn Johnson fan (she's up for gymnastics all-around tonight!)

I'm the sports nut in our family so I'm definitely watching the Olympics. But we're of course, tuned to the Canadian end, though I did catch most of Phelps wins. He is an amazing athlete.

That's great, you have been enjoying the Olympics. I haven't even watched them!

I'm with you Mom! This has been a great Olympics. Now go cheer on the Redeem Team!